1 Day Isle of Skye with Fairy Pools Tour from Inverness

An amazing 1-day journey that visits the most popular places of Scotland, including Loch Ness, Eilean Donan Castle, and the Isle of Skye. 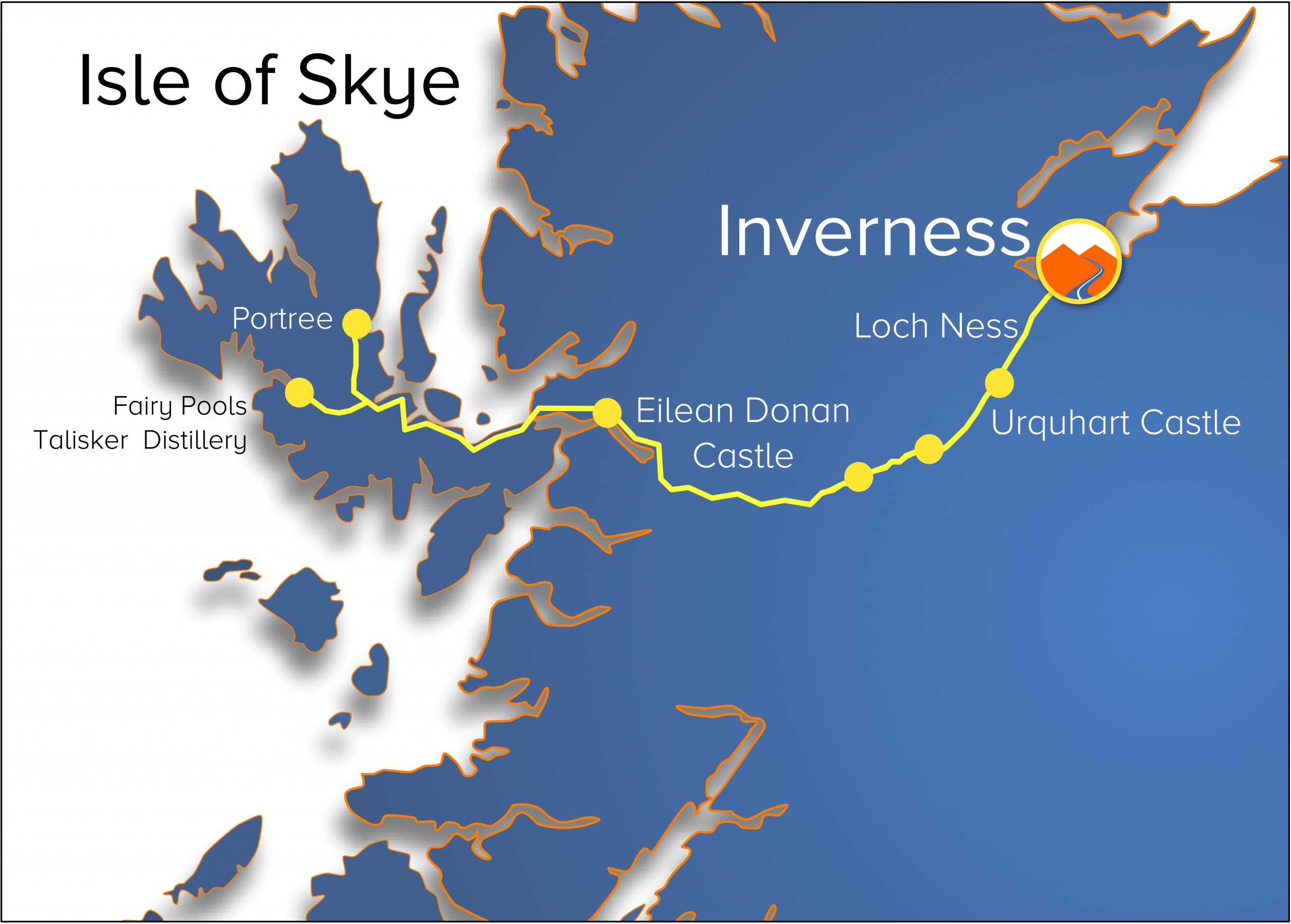 On the shores of Loch Ness you will be told stories of “Nessie”, of the Great Glen boundary fault, and of the mighty Urquhart Castle.

The Great Glen is a huge valley in the Highlands, eroded by glaciers more than 10,000 years ago. These glaciers carved the valley, forming a series of deep lakes, among which is Loch Ness.

Urquhart Castle saw great conflict during its 500 years as a Middle-ages fortress. Control of the castle passed back and forth between the Scots and English during the Wars of Independence.

The Five Sister of Kintail and Glen Shiel

Landscapes are unforgettable and the history of this place is unique. Here is where the Battle of Glen Shiel took place in 1719, between the Jacobite, supported by 300 Spanish troops; and a government army loyal to King George I. Despite their superior numbers, the Jacobite lost. Among various others, Rob Roy, fought amongst the Jacobite.

Eilean Donan Castle is said to be the most photographed castle in Scotland, and once you have seen it for yourself, sitting majestically in the middle of 3 different Lochs: Duich, Alsh and Long, you will understand why! The stronghold of the clan MacRae has been used as filming location in James Bond’s “The world is not enough”, and in countless other movies.

We drive across the Skye Bridge, making our way “over the sea to Skye”. The views from the Bridge can be far-reaching and spectacular – catch your first glimpse of the mighty Cuillin Mountains as we drive over the bridge.

Take in the stunning views of the Cuillin Mountains. The Black Cuillin Ridge was formed 60 million years ago and is the remnant of an eroded magma chamber of a huge volcano. Consisting mainly of hard gabbro and basalt rock, the ridge was sculpted into its current form by glacial activity and subsequent weathering over the millennia, which created the unique jagged character of the Ridge. The Red Cuillin have a rounded appearance, due to being mainly composed of granite, which is softer than gabbro, hence less resistant to the glaciers.

We continue on our journey in the shadow of the Cuillin Mountains. Walk with the supernaturals through fairy-sized landscapes and their most famous baths, the Fairy Pools. For this part of the tour, you must take the fairy oath. Please wear waterproof clothing and footwear, as we travel to fairy land by going underneath waterfalls. The pools are located in one of the most dramatic landscapes on Skye. The fairies regularly bathe here, in the crystal clear green pools of the River Brittle. Weather permitting, you can swim in the pools of the river, one of the UK’s best wild swimming spots. Have fun diving under natural arches and waterfalls, but please do not spy on the fairies, as they can easily take offence!

We in no way endorse swimming in the pools and it is done entirely at your own risk.

Talisker distillery based in Carbost is one of the three whisky distillery on the Isle of Skye, the oldest working distillery on the Isle of Skye. Set on the shores of Loch Harport with dramatic views of the Cuillin mountains. Producing an alluring, sweet, full-bodied single malt is so easy to enjoy, and like Skye itself, so hard to leave. We shall go through the visitor centre (not on the tour) and if available sample one of the fine whiskys produced here.

The village of Portree is situated on the east side of Skye overlooking a sheltered bay, and it is the main town of the island.

Portree was first established as a fishing village at the beginning of the 19th century by Lord MacDonald. The name of the town of Portree commemorates the visit of King James the V in 1540. Records have it that it was originally called Portray and was believed to have been inhabited as far back as the Mesolithic period. Its name really comes from the Gaelic for Port on the Slope.

As we arrive back on the mainland our route back to Inverness then takes us across a large expanse of wilderness, before returning to the city for drop off at the Cathedral.