Private Tour. Get in touch for a quote: contact@tourskye.com
Book now
Tour Highlights

Spend a day discovering the land and history of Scottish heroes William Wallace, Robert the Bruce and Rob Roy, and experience the stunning scenery of the Trossachs National Park. Begin with the visit of the magnificent Stirling Castle and catch a glimpse of the legendary Stirling Bridge and Wallace Monument from the Castle esplanade. Continue with the exploration of the Trossachs National Park with spectacular views of lochs, mountains and forests. 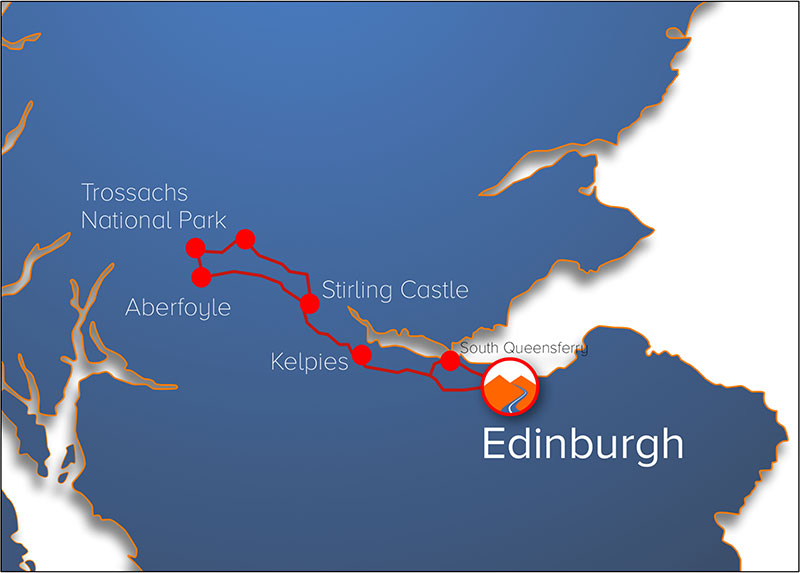 The Kelpies at the Helix Park

Departing Edinburgh, we travel north for our first stop of the day at the Helix Park where we can take a few pictures of the stunning Kelpies, the 30 metre high horsehead sculptures designed by sculptor Andy Scott completed in October 2013. They stand next to a new extension to the Forth and Clyde Canal, and near River Carron, in The Helix, a new parkland project built to connect 16 communities in the Falkirk Council Area, Scotland.

We continue to the magnificent Stirling Castle. This Castle, sitting high on volcano rock, is one of Scotland’s most historically significant fortresses and offers outstanding views of the valley below hosting the Wallace Monument, dedicated to the national hero William Wallace, known all around the world as Braveheart, for the movie starring Mel Gibson, and Stirling Bridge, the setting of the most famous battle ever fought in Scottish history.

You will have the time to visit the castle and learn all about Mary Queen of Scots and the Religious Reformation of Scotland happened in the ‘500.

Aberfoyle in the Trossachs National Park

We travel westwards to the Trossachs National Park; from the coach you’ll see the first body of fresh water of the day: Lake Menteith. Are you curious to know why we call it Lake Menteith instead of Loch Menteith? Make sure to ask your tour guide on the day!
We arrive to Aberfoyle, famished for the long morning exploring amazing landmarks. Here we can sample some tasty Scottish food for lunch and enjoy a stroll through the picturesque village of Aberfoyle. The most brave in the group (or just the fittest, eheh), can walk with us in the footsteps of Reverend Robert Kirk. Who’s this guy, you are wondering? He was a Reverend nonetheless, who in 1691 published a controversial book that provoked the wrath of the Faeries of the Trossachs. You can still see the Reverend’ soul trapped in an old oak tree at the top of Doon Hill and Fairy Knowe

The Trossachs National Park has plenty of stunning views, so that a panoramic tour of this beautiful area is a must: we’ll take you to the winding roads of the Duke’s Pass, where you’ll see the rugged Scottish scenery at its utmost splendour; Loch Achray, where Mary Queen of Scots took refuge in the attempt to escape the Rough Wooing of Henry VIII of England; Tigh Mor Hotel were Walter Scott used to solitarily write his world-famous novels; and finally we stop in Brig o’ Turk to take a picture of the unique bicycle tree.

Sights on the homeward journey

We start our homeward journey. From the coach you’ll be able to catch a glimpse of the small village of Kilmahog, where if you are lucky you’ll be able to spot 2 adult Highland Cows and a calf of the same kind (what to say about that, other than “Aweeee, cute!”); we then pass the quaint town of Callander, founded by the Romans; and Doune Castle, used as film location for Outlander the TV series (maybe calling it Castle Leoch rings a bell?) and Game of Thrones. The older generations may remember it for Monty Python’s movie “The Holy Grail”.

Before we enter Edinburgh, we make one last stop at South Queensferry, where you will view the three bridges that cross the Firth of Forth: the 19th Century Forth Rail bridge is Scotland’s greatest piece of engineering, and a UNESCO World Heritage Site; the 20th century ‘Forth Road Bridge’; as well as the 21st century ‘Queensferry Crossing’ which opened in 2017. Three spectacular bridges, from three different centuries span the Firth of Forth, connecting our Capital city and the Kingdom of Fife.

This Tour is only available on a Private basis. Please get in touch to ask availability and a quote for this at contact@tourskye.com